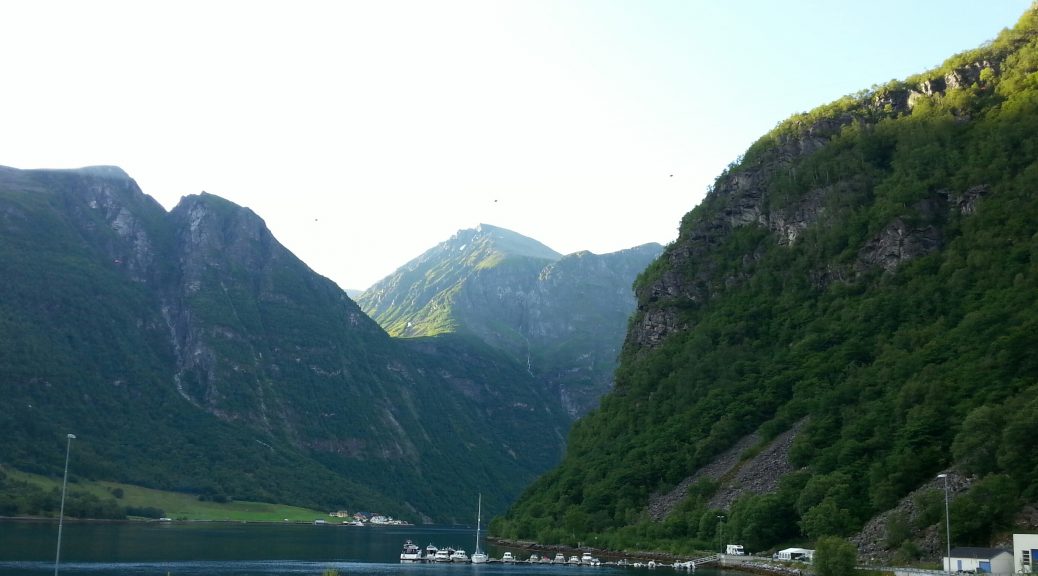 Woke up at 5 because of an early flight to Aalesund – getting to the airport takes a bit longer after I moved to the countryside. The plane was super small, and the islands at Sunnmøre are very different from those at Nordmøre (where I’m from) – they sort of just rise straight out of the sea.

I had to wait a bit for the rest of the band to arrive in the city center, but that’s ok because I’m very good at waiting. We ate Fish and Chips. As I didn’t start eating fish until I was about 25-26 this was perhaps the 4th time I’ve eaten it, even though it’s like a national dish where I come from. Anyway… We drove together with some other folks in a mini bus to Bjørke. We stopped at a supermarket and bought too little beer. Which is probably good for our health and all that.

Bjørke is weird. It’s like squeezed between the mountains, and they are super steep mountains too – straight up! (Note that I am not usually excited about Norwegian nature, so this was a fun experience.) It was very beautiful there.

We were going to live in a house called Berthahuset. It was red, and quite big, and had the bathroom in the basement just like my house, and we were going to be 15 people there (if I remember correctly). We, that is Ale, Fabio, Moa, and me, and Eivind for one night, stayed in one small bedroom. But I think that was good because there were only people I knew there.

In the evening there was like a welcoming party. I talked to some very nice people. (And Stefano turns out to be quite the Manics fan, which made me extremely happy.)

We practiced at the stage where we were to play in the evening, so it was like a dress rehearsal. And we ate pizza. And it was raining a lot. And we went home and I slept a bit.

The concert was fun, and there were lots of people, and I think we played quite well.

And then we danced. I cannot quite comprehend how Ale managed to convince me that that was a good idea, but it was great fun. And then I sort of managed to remember that I quite like to dance, so we danced at Indietracks as well.

After we got home, Ale and I went for a walk in the very non-dark night. And we thought we saw a fox. But it may have been a cat also.

The weather was nice so we walked into central Bjørke.

I did some percussion in the church with Elin Grimstad. That was fun but hard (we only practiced right before the gig), because the songs were quite difficult, but I think it was ok and that I didn’t put a large amount of shame upon the other musicians. Luckily there’s evidence in the form of moving pictures, so you may decide for yourselves:

The church was very beautiful, and I thoroughly agree with the choice of paint colour on the doors.

After that I was exhausted because of too much people and new stuff and such, so I just wanted to go to bed. Which I did. And then I didn’t want to go to the concerts as early as the others, but Ale stayed with me, so that was good, and the driver picked us up an hour later. The people who drove us around were the best!

Feivel, Red Shoe Diaries, and Trust Fund were great. After the concerts we were very tired, so no dancing or other extravaganza.

Took the bus and left at Moa (the place, not the person). And it wasn’t as sad as usual, because Indietracks was only three weeks away.