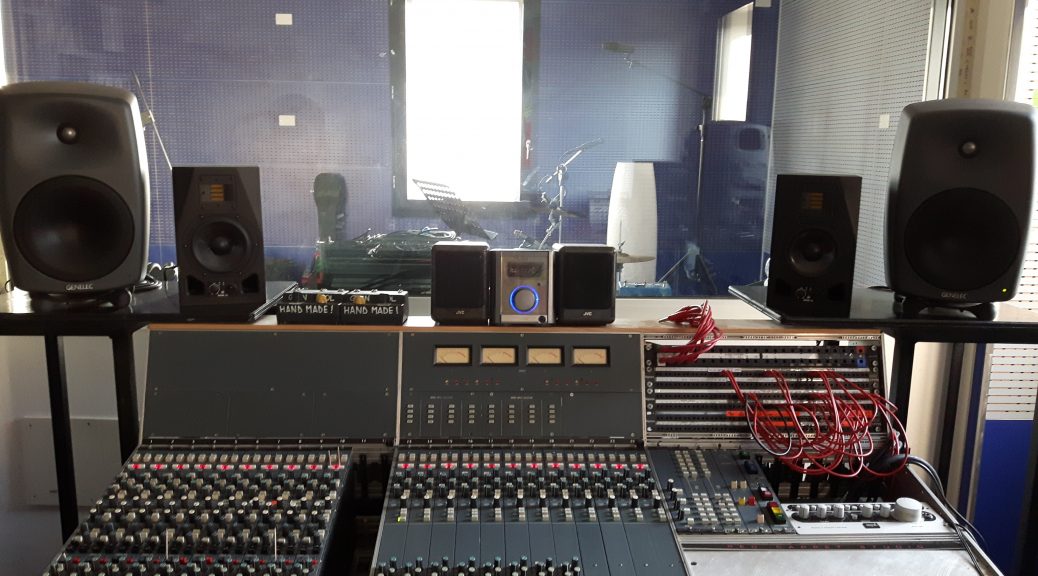 Earlier in October we did a little bit of recording again, and this time with the whole band which made it even nicer. I was actually a little bit scared to give up the full control over the keys, but it turned out to be really great. Both because I didn’t have to play all that stuff, but also because then we could record the “base” of each song all together, which is more fun than playing one at a time. And because then we are a proper band!

I went to Italy via Amsterdam on Thursday the 6th, and had quite the long stay in Amsterdam, which I filled with writing a surprisingly long email on my phone, and with looking at food I do not understand how to buy.

Ale picked me up at Linate, and it was, as always, great to drive along the motorway in the late evening with him.

The next day, Friday the 7th, we went into the studio to rehearse the songs we were to record. First with just Ale, Fab, and me, and then Moa came with the bus from Bergamo, and we were finally the whole band again, and could start practicing for real!

This time Ale wanted to be just a musician, and not both play guitar and be a sound engineer at the same time, so a guy called Andrea came along to help us. This was a bit strange for me, but he was a cool guy so I got used to him being there pretty fast. We didn’t record anything on Friday, we just practiced and put up the microphones and such.

That evening we had pizza at La Calchera. I really like that place, and the pizzas are super big, so I always end up making a mess, because I know I cannot eat all of it so I sort of start somewhere in the middle to prioritize…

On Saturday the 8th we started the recording. The plan this time was to record five songs, so that’s what we did.

In the evening I saw Alla Ricerca di Dory with Ale and his kids. One thing I notice when I’m watching things in a language I’m not particularly good at is that my sense of humor gets even worse than usual. So when characters hit their heads or crashes into things my brain finds it SO funny. I think it’s happy that there’s finally something that it can totally understand. (Next year I’ve used 10 years on not learning Italian… but I’m honestly trying now – as each time I come home and have the Italy blues, but maybe this time is it!)

Sunday the 9th was the last day with Andrea and Fabio there, so we did lots of things where all four of us were recorded at once, like backing vocals and hand claps. This was fun. We’re a good gang.

On Monday the 10th we started out with Moa doing lots of add-on organs and synth stuff, and I did some also, and also some more vocals. Then we drove Moa to the buss station, where a scary and very drunk man was angry with us because he thought we were Americans (I think). People are weird.

And then it was just Ale and me and my to do list. I had saved all my guitars for the very end for instance…

I’m really happy with the recordings we did. They will be released as an EP some time in spring next year (I assume), and it seems there might be some gigs coming up as well. I’ll keep you posted.